Water cooled graphics card overview: The handlers of the extensive graphics workstations or the users who want to experience high-quality gaming will bash to extract as much high performance from the existing Graphics card as much it could yield. Manually overclocking custom board GPU might be the technique to be taken into account by them while boosting up the Graphics Card’s operation. Though overclocking will increase the speed of the GPU than the speed it fundamentally works at, it will surely draw out larger voltage and hence, will be the hub to produce more heat than before. The question that comes to our mind is “Isn’t air cooling enough to cut back the heat produced?” Well, the production of more heat ultimately means that the air coolers of in GPU will work harder and make more noise. The experience of the users who are sneaking in a game or perhaps watching a demanding 4k movie will be spoiled with the loud whirring noise of the GPU. So, this is the point where air coolers of the GPU lack and water cooled graphics card demonstrates its benefits.

Water cooled GPUs are the ultimate video cards that are based on the technique of liquid cooling. Based on this technique there are two types of water cooled graphics cards:

They use a liquid cooling unit with a radiator and fan to maintain its cooling.

They use a water block unit to maintain its cooling.

How helpful is a water cooled graphics card?

Therefore, making use of these amazing water cooled GPUs will supply you with a high-end desktop experience while giving you high performance with much lesser or no noise at all.

Thus, to relish this superior operation of your PC, there are many water cooling graphics cards available in the market.

Here are a list and overview of top amazing water cooled graphics cards: 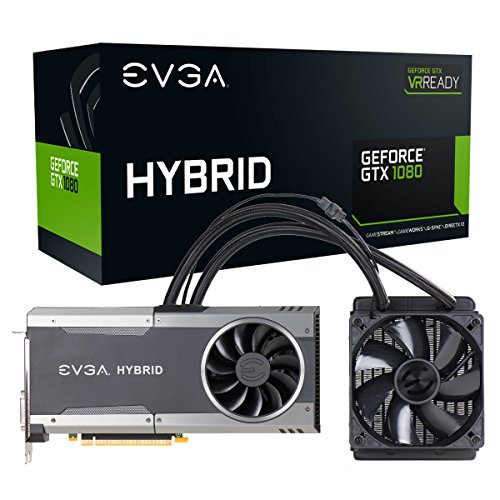 If you’re looking for a greatly advanced gaming GPU, EVGA GeForce GTX 1080 FTW HYBRID is the one. This innovative liquid cooled Nvidia graphics card features NVIDIA’S breakthrough ‘Pascal”.  It is made using the latest and ultra-fast FinFET and is very power efficient.

Talking about its performance, this GPU with a video memory of 8GB GDDR5X VRAM will provide you with ground-breaking new gaming technologies, pioneering next-gen VR and industry-leading high performance. It supports a maximum 7680×4320 digital display and greatly exhibits simultaneous multi-projection on a maximum of 4 monitors. This remarkable graphics card work on a great frequency with a base clock of 1721 MHz, boost clock as 1860 MHz and its memory clock is 10000 MHz effective.

Coming to its cooling feature, this incredible video card highlights an “all in one” water cooled GPU solution, EVGA ACX 3.0 cooling. It has a great heat soaking capacity and significantly lowers the GPU operating temperature. It runs around 40 °C cooler than the standard GeForce GTX 1080. This GPU comes with a 120mm radiator and fan which immensely lowers the heat of the GPU. It has a dedicated memory plate with a 10CM cooling fan for the cooling of VRAM and VRM. Thinking of the maintenance you might need to take care of? Don’t worry! You won’t have to top off the fluid levels. The water cooler that this card features is completely self-contained. It is free of all the liquid cooling GPU maintenance which deprives you of the onerous task of filling or custom tubing. Isn’t it just great?

Exploring more about this great water cooling video card, it supports the latest Microsoft DirectX 12 API which provides high performance in the latest DirectX 12 games. You can play them all smoothly on 4K resolution. It offers a customizable RGB LED for the adjustment using EVGA Precision XOC overclocking software.

The card undergoes a maximum of 215W power consumption with a requirement of an 8-pin PCI or 6+2 pin Express power connector. The platforms it requires include Windows 10 32/64bit, Windows 8 32/64bit, and Windows 7 32/64bit. It also comes with a High End VGA Cooler. 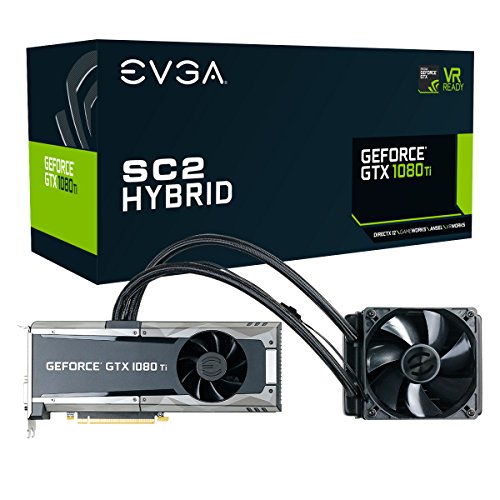 Get a high-end gaming delight with the EVGA GeForce GTX 1080 Ti SC2 HYBRID GAMING graphics card. This video card is the most effective water cooled Nvidia GPU. It is also built-in accordance with Pascal GPU architecture and attains all the advantages that GTX 1080 FTW Hybrid Graphics card provides.

Where’s the difference? Well, this GPU is equipped with the exclusive iCX Technology which gives it more cooling advancements. This technology includes having 9 thermal sensors and MCU’s embedded on the PCB. These sensors focus on each key component of the GPU and direct to cool down the most heated component. These sensors can even be monitored in real-time and displayed on PXOC OSD. Thus, keeping the overall temperature under control. The hybrid cooling system of this GPU provides better-overclocking capabilities. It has a water cooling unit for cooling down GPU and VRAM whereas a dedicated memory cooling plate includes heatsink and fan unit for the VRMs. The HYBRID cooling solution of this GPU is so effective that it could sometimes even cut your GPU load temperature in half! Unbelievable, right? That’s why this card is also known to have true water cooled GPU perfection.

Despite this, EVGA iCX Technology is a combination of new PCB, thermal modules, and precision XOC which offers a new era of gaming. You can enjoy high-quality gaming at the highest graphics of 4K without the tension of the heating of the GPU.

Also, the video memory of this GPU is 11 GB which is more than the FTW hybrid and also, this card comes with 3584 CUDA Cores. This GPU has around 35% faster-operating speed than the GeForce GTX 1080. It operates at a frequency of 1556 MHz and which can be boosted up to 1670 MHz. It has a memory clock of about 11016 MHz frequency. 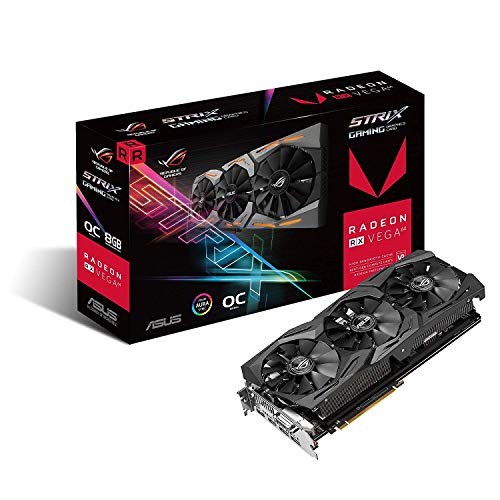 This card is an excellent choice for the users for any task whether they need to handle the load of GPU work such as editing videos or photos or have to play high-end games. The power hub of this video card lies in its 4096 Polaris Steam Processors which is built using the 14nm FinFET manufacturing process.

The best part? It has the fastest 8GB video memory of HBM2, which is 2048 bit, which has low power consumption and is even faster than the GDDR5X memory that is used in Pascal-based graphics cards. This feature is highly beneficial for VR and high bandwidth operations.

Talking more About this GPU cooling features, it has a closed-loop liquid cooling system. The closed-loop feature comprises of a highly reliable compact pump that is used to circulate the water in a closed-loop. This is the scheme which offers an excellent means to meet the combined challenges of high heat loads of the GPU, low thermal resistance, and maintaining a low noise while managing the high heat fluxes. Thus, making use of this incredible video card by AMD, the heat produced by the GPU while operating at high frequency is maintained efficiently.

Enjoy a great high-end GPU experience with this card which operates at a frequency of 1408 MHz and can be boosted up to 1668 MHz. For the interest of gamers, the card supports DirectX 12.0, which means they can play the latest AAA games on 4K resolution.

Pitfall: Although, you just need to have a good high capacity power supply as this is a hungry power card which consumes a maximum of 1000 watt of power. 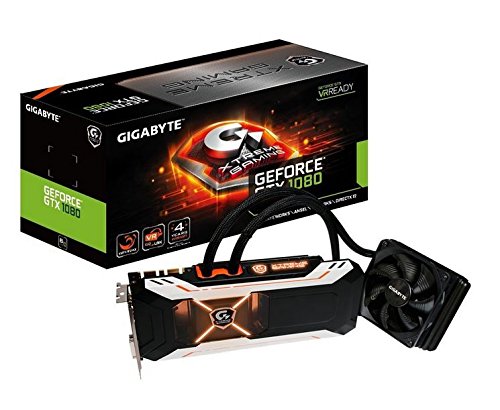 Gigabyte GeForce GTX 1080 8GB Xtreme Gaming WATERFORCE WB Graphics Card features a WATERFORCE water block cooling system. The optimized liquid flow of the water block in this card rapidly removes the heat from the large copper plate. This plate is in direct contact with the GPU, VRAM, and VRMs and effectively transfer the heat generated to the liquid. Get a smooth and comfortable gameplay experience with zero noise.

This video card by Gigabyte delivers the fastest performance, with the most advanced gaming technologies and provides the users with the best gaming ecosystem. Also, it has great power efficiency.

Get the next generation VR experience with the Xtreme VR Link that this GPU provides. It is the best solution for both 3x 4k monitors demand with 3 DP ports and VR device demand with 3 HDMI ports. It offers a revolutionary 360-degree image capture even in VR. It comprises of Titan X-grade Chokes and Capacitors for extreme durability.

The card is a great package of ultra-high-resolution, smooth gameplay features, and multiple monitor display.

Further talking about its body features, it has a 16.7M Customizable color options and several lighting effects that could be your choice for the scheme of gaming rig through XTREME Engine utility. The glorious black metal plate at its back strengthens the structure and invites the gamers’ passion for gaming. For compact protection, the card is covered with Aerospace-Grade PCB Coating which makes it dust-resistant, moisture-resistant, and corrosion-resistant. 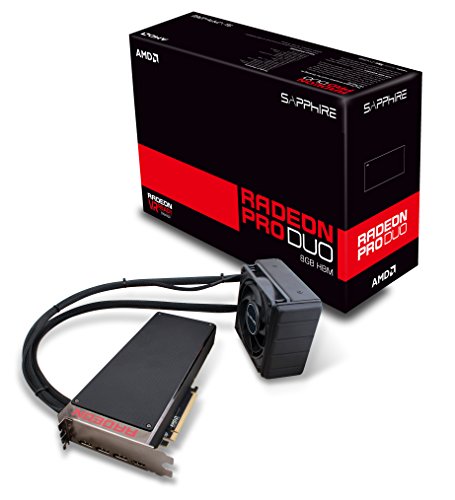 Sapphire Radeon Pro Duo 8G HBM is a potent graphics card from AMD based on the VIGO architecture of Graphic processors. As the name includes DUO, this water cooled GPU consists of 2 GPUs. It has 8192 Polaris Stream Processors. The video memory of this card is 8GB HBM (High Bandwidth Memory) which offers a great environment for gaming and high bandwidth operations.

About its water cooling process, this water cooled video card has a closed-loop water block cooling solution. It contains its own radiator and fan.

Why Sapphire Radeon Pro Duo 8G HBM? Well, this card has a maximum memory bandwidth of 1024 GB/s and its pixel rate is 128G Pixel per second which makes it exclusive. The card offers a clock frequency speed in between 992 MHz and 1124 MHz, making it one of the top speed graphics card. With the support of the DIRECTX 12 version, it offers plug-in and playing smoothly at 4K resolution.

Wrapping up, the above water cooled graphics cards are the best ones which can be used for over-clocking and yet producing less heat. They also free you from tasks of maintenance of GPU. These video cards will provide you with the ease of doing your tasks with no disturbance of the throttling of GPU while cooling down the heat.

However, to keep things open-ended, these water cooled graphics cards also have pitfalls which include higher costs, more space requirements and huge power consumption because of the radiator and pump unit present in them. So, take into consideration all the things about them and purchase one according to your needs!

GPUs are one of the most heat-generating components in a computer. Failure to deal with the heat generated from a GPU could result in your computer literally burning up. Water cooling is just one of the best and most efficient means of cooling GPUs. Water cooling allows users to get involved in intense gaming and video rendering without having to worry about your computer

Yes! It is absolutely essential that one has a cooling system installed with their GPU system. This is especially essential if the user uses their PC a lot, particularly for intense gaming or video editing and rendering. In such cases, their GPUs began to release a lot of heat and only a cooling system can ensure that their GPU doesn’t literally burn up.

While liquid-cooling is a wonderful means of preserving the life of GPU, it also has a catch. That catch is maintenance. Liquid-cooling despite its effectiveness requires maintenance. But don’t worry! Maintenance needs only be done once a year. This involves checking for fluid leakages, replacing the pump or the fluid may degrade over time (and need to be replaced with new fluid).